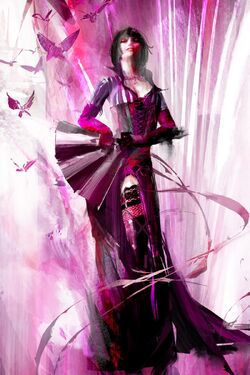 Mesmers are magical duelists who wield deception as a weapon. Using powerful illusions, clones, and phantasmal magic to confuse and distract their foes, mesmers make sure every fight is balanced in their favor and their opponents can’t believe their eyes.

Mesmers are masters of mirage. They weave deception magic that seeks to confound, disorient and dumbfound their enemies. With a wave of the hand, they can shatter their own illusions to produce even greater special effects. As a scholar profession, mesmers wear light armor.

Illusions come in two types: Phantasms and clones. Phantasms are illusions that look like the caster but have their own names, have a purple color and carry special illusionary weapons, which look different and have specific behavior. Phantasms cause a substantially larger amount of damage and are more durable than clones, which are most effective for distracting enemies and powering shatters. Clones look exactly like the mesmer and display the same name.

Mesmers also enjoy a wide variety of skills which allow them to avoid attacks, either by blocking and counterattacking, or by using stealth magic.

Mesmers are adept at causing confusion on their enemies — a condition which causes the mesmer's enemies to take damage each time they use a skill and stacks in intensity.

The mesmer has the following trait lines:

The mesmer is a scholar profession and wears light armor.

There are ten possible weapon sets for this profession and two while underwater. The mesmer can switch between two weapon sets while in combat.

The following crafting disciplines can create items that are useful to the mesmer:

In the biography step of character creation, mesmers must decide the mask that they wear - Harlequin's Smile, Phantasm of Sorrow, or Fanged Dread. 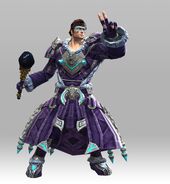